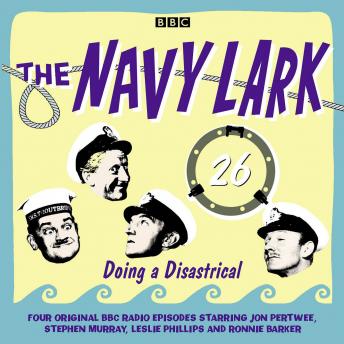 Jon Pertwee, Leslie Phillips, Stephen Murray and Ronnie Barker star in these four hilarious radio episodes. 'Secret Mission to Calais'/'Working Their Passage' (25 March 1960): The Admiral foists a 'ticklish job' from the Diplomatic Service on Povey: collect somebody who has got out of 'you know where' from France - at the same time as Pertwee needs to get Pierre home. 'The Sabotaged Floggle-Toggle Box'/'Floggle Toggling Their Way Through' (19 September 1966): Mr Queeg and 'the Lad' believe that there has been a case of sabotage aboard Troutbridge when iron filings are found in the frigate's floggle-toggle box. 'Jigsaws and Jemmies'/'Doing a Disastrical' (23 July 1967): Somebody has tried to break into the new WREN's quarters, and a bag of tools marked 'CPO P' has been found. Is it the work of the Chinese People's Observation Patrol, or is the culprit closer to home? 'The Mickey Mouse Toothbrush'/'Bunging Up' (2 February 1969): Mr Phillips has trouble with the plumbing when he bungs up his basin plug hole with his Mickey Mouse toothbrush. But the toothbrush trouble doesn't stop there... With Richard Caldicot, Heather Chasen, Tenniel Evans and Michael Bates.