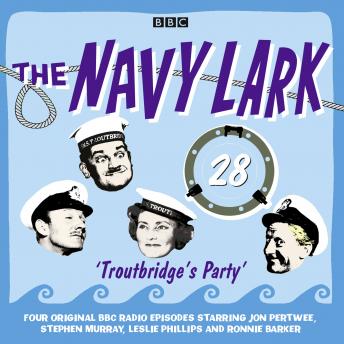 Jon Pertwee, Leslie Phillips, Stephen Murray and Ronnie Barker star in four more hilarious radio episodes. 'Troutbridge's Party'/''Finding Their Way Through' (18 October 1963): A peeved Pertwee is barred from a wardroom celebration for Admiral Sir Benjamin Troutbridge. 'Rescuing Admirals'/ 'Working Their Passage' (25 October 1963): The crew need to rescue two of the top brass from a lighthouse, Pertwee meets his uncle and an old face sails back. 'Captain Povey Reports Sick'/'Doing a Mischief' (8 August 1965): When the Captain catches a cold, Murray takes over and chaos ensues. Then Troutbridge is sent out to sea to look for a stranded boat - which, thanks to Mr Phillips, they can't find. 'The Relief of the Weather Ship'/'Weathering' (26 January 1959): Troutbridge needs to take a professor out to their weather ship urgently. However, the Professor turns out to be a rather attractive woman who catches the eye of the crew... With Richard Caldicot, Heather Chasen, Tenniel Evans and Michael Bates.