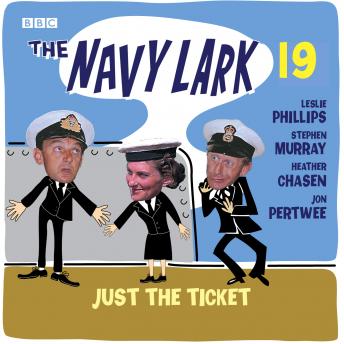 The Navy Lark, one of radio’s longest running laughter-makers, kept the nation on the crest of a wave from 1959 to 1977. All at sea in the Senior Service were conniving Chief Petty Officer Jon Pertwee, silly-ass Sub-Lieutenant Leslie Phillips with his cry of ‘Left hand down a bit!’, and the constantly bemused Stephen Murray as ‘Number One’. Tenniel Evans made mischief as Leading Seaman Goldstein, and Ronnie Barker played (barely) Able Seaman Fatso Johnson and Engineer Queeg, a man permanently out of his depth. Set sail with them once more in these hilarious episodes as the crew head back to Portsmouth by train – only to find Troutbridge is elsewhere; the Admiral proposes Troutbridge for a top secret exercise to recover a space capsule; Murray’s courtship of Heather is frustrated by Pertwee; and Troutbridge prepares to take two ambassadorial passengers back to Tratvia for a trade festival. Includes: 'Searching for their Ship'/'Where is Troutbridge' (4 September 1966); 'Buoying Up'/'Buoys Will Be Buoys' (25 September 1966); 'Buying Tickets'/'Just the Ticket' (23 October 1966) and 'Pertwee and the Tratvian Beer' (6 November 1966).