The Navy Lark, Volume 27 - Have Been Masquerading 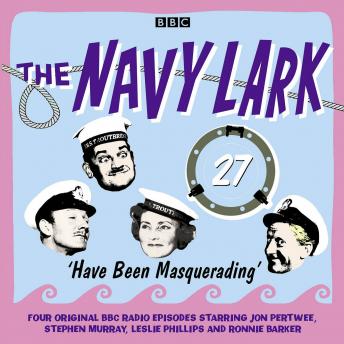 Jon Pertwee, Leslie Phillips, Stephen Murray and Ronnie Barker star in four more classic radio episodes. 'Wren Chasen Returns'/'Working Their Passage' (27 September 1963): The crew return from leave to a shock - Troutbridge is to be mothballed in Plymouth. Meanwhile, Sub. Lt. Phillips is horrified to find that Wren Chasen is back after 11 months in Scotland, during which time he never wrote to her. 'On the Carpet'/'Working Their Passage' (4 October 1963: CPO Pertwee has stolen a carpet from Mr. Murray's cabin - but Murray has other things on his mind, as he is planning a romantic cinema trip with Heather. 'The Povey's Move House'/'Doing a Mischief' (1 August 1965): The Poveys are moving house - but Captain Povey has lost the money that his wife gave him to pay for the removal men, so he has to turn to Pertwee for help... 'Mr Philips' Wrong Uniform'/'Have Been Masquerading' (12 January 1969): After taking an unexpected dip, Mr Phillips' uniform is soaked - then a spell in the boiler room causes it to shrink! Tiddy picks up a spare from the dry cleaners, but there's a problem - the uniform he collects belongs to Captain Willis... Featuring Richard Caldicot, Heather Chasen, Tenniel Evans and Michael Bates.

Navy Lark, Volume 27 - Have Been Masquerading