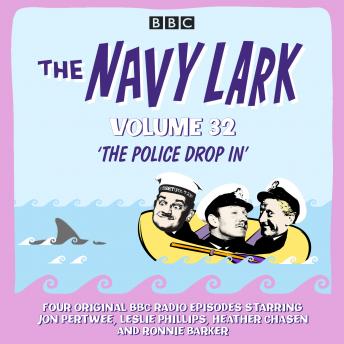 Jon Pertwee, Leslie Phillips and Stephen Murray star in four more episodes of the popular nautical comedy
Frenchmen in J.41 ('Having a Bit of Trouble with the French') 13 August 1967
Troutbridge returns from trials to find a French frigate docked in their berth - to Pertwee's great concern...
The Police Drop In ('Tangling with the Law') 20 August 1967
Povey is told to co-operate with the law over a theft from a local museum - but the Troutbridge crew get nervous when a police helicopter drops in.
The Bumble Spit Lighthouse Affair ('Cavorting About') 23 April 1972
Troutbridge has an unfortunate collision with the Bumble Spit Light Vessel, and Murray is feeling tetchy because Rita is away.
The Tonipouhaha Treasure ('Digging Themselves Stupid') 30 April 1972
An MOD decision that Troutbridge should 'show the flag' in the South Seas leads the Master to head to Tonipouhaha in search of buried treasure...
These classic BBC radio episodes also feature Ronnie Barker, Richard Caldicot, Heather Chasen, Tenniel Evans, Michael Bates and Elizabeth Morgan.