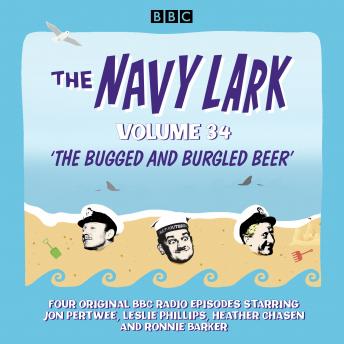 Four vintage episodes from the classic seafaring sitcom, including the original pilot episode and the final regular episode

Operation Fag End (‘Working Their Passage’) 5 April 1959
New head honcho Commander Povey is heading to the island to inspect the crew – just as Pertwee’s consignment of 50,000 smuggled cigarettes is about to arrive…

The Bugged and Burgled Beer (‘Bugging’) 1 October 1967
Pertwee has a purchasing problem: the two cases of beer he sold to his customers have ended up in Povey’s custody. Can a bugging device help him recover his haul?

Number One’s Anniversary (‘Biff Boff Boffing Their Way Through’) 11 July 1971
With his first wedding anniversary approaching, Mr Murray is in a bad mood – and Captain Povey is in trouble after switching the photos of two applicants for his wife’s advertisement for an au pair.

Captain Wilberforce Pertwee (‘Having a History Lesson’)18 January 1976
After Pertwee’s ingenious defence gets Phillips acquitted at a court martial, he recounts how he got his inventiveness from his wily Great-Great-Grandfather Wilberforce Pertwee.