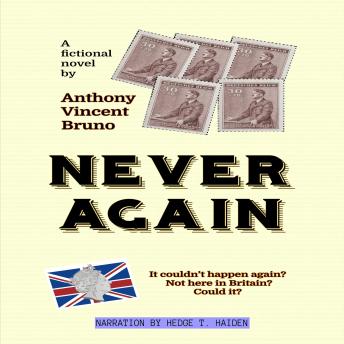 Never Again - It couldn’t happen again? Not here in Britain? Could it?

Be careful what you wish for? Considering recent events, we should all keep a look over our shoulder - the unthinkable could happen again, so easily. Let us hope it does not because the numbers would be even more staggering than the Holocaust. This time it will not be the Jewish people. Muslims have to clean house from within, or the lunatics will do it for them.Pulled from the aftermath of an ISIS attack in London where 532 people perished, Tobias Rock believes that it was his destiny to survive. Europe is a powder keg waiting to implode with vast numbers of immigrants leaving the Middle East to pass safe havens to reach Britain. This is unacceptable to the former British Army Intelligence Corps officer who embarks on a new mission - to rid the United Kingdom of all militant Muslims and anyone offering them shelter. To achieve his goal he must enter the murky world of politics and gain power by fair means or foul. A holocaust awaits as a reign of terror threatens the oldest democracy in the world but Rock only cares for the preservation of British values and strengthening her armed forces. Will history repeat itself or will Rock's enemies in parliament stop him in time.

Never Again - It couldn’t happen again? Not here in Britain? Could it?

This title is due for release on March 7, 2020
We'll send you an email as soon as it is available!