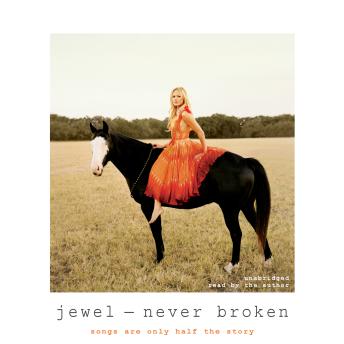 New York Times bestselling poet and multi-platinum singer-songwriter Jewel explores her unconventional upbringing and extraordinary life in an inspirational memoir that covers her childhood to fame, marriage, and motherhood.

When Jewel’s first album, Pieces of You, topped the charts in 1995, her emotional voice and vulnerable performance were groundbreaking. In the tradition of Joan Baez and Joni Mitchell (she has been compared to both), a singer-songwriter of her kind had not emerged in decades. Now, with over thirty million albums sold worldwide, Jewel tells the story of her life and the lessons learned from her experience and her music.

Living on a homestead in Alaska, Jewel learned to yodel at age three and joined her parents’ act, working in hotels, honkytonks, and biker bars. Behind a strong-willed and independent family life, with an emphasis on music and artistic talent, was also instability, abuse, and trauma. At age fifteen Jewel was accepted to the prestigious Interlochen Arts Academy in Michigan, where she began writing her own songs as a means of expression. She was eighteen, homeless, and living out of her car in San Diego when a radio DJ aired a bootleg version of her song, and it was requested into the top-ten countdown, something unheard of for an unsigned artist. By age twenty-one, her debut album went multi-platinum.

There is so much more to Jewel’s story, one complicated by family and financial woes, by crippling fear and insecurity, by parents who forced a child to grow up far too quickly, and by the extraordinary circumstances in which she become a world-famous singer and songwriter. Here Jewel reflects on how she survived and how writing songs, poetry, and prose has saved her life many times over. She writes beautifully about the natural wonders of Alaska, about pain and childhood trauma, and about discovering her own identity years after the entire world had discovered the beauty of her songs.

“Jewel is a truth teller. Never Broken occupies that sacred space of soulful storytelling, hard-earned wisdom, and beautiful writing. I couldn’t put it down and I can’t stop thinking about it. This is a book that lingers in your heart.”—Brené Brown, PhD, #1 New York Times bestselling author