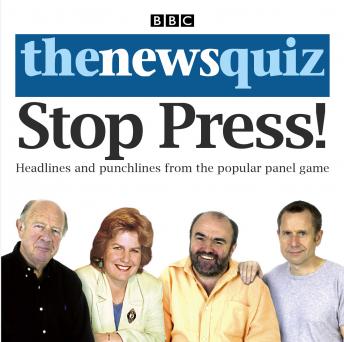 The News Quiz, ‘the finest topical comedy panel game known to radio’, has been providing headlines and punchlines since it first aired in 1977, and spawned the hit television panel game Have I Got News For You. These four episodes see the plucky panellists, including Alan Coren, Andy Hamilton, Phill Jupitus and Jeremy Hardy, tackling the biggest news stories (and some of the smallest) with their inimitable wit and wisdom. With guest stars such as Clive Anderson, Jo Brand, Phil Hammond and Carrie Quinlan, they face questions on a variety of topics, from Tony Blair, Gordon Brown, Iraq and the NHS to baffled hedgehogs, feisty female chimps, Jose Mourinho’s dog and the shocking discovery that mice don’t like cheese. Sandi Toksvig is at the helm, whilst newsreaders Harriet Cass, Corrie Corfield and Rory Morrison read a selection of the funniest cuttings. So sit back and enjoy the highlights of 2006 and 2007 from this smart, silly and satirical game show, distilled by the very best and wittiest commentators.