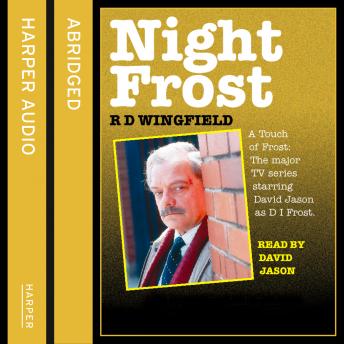 Another set of unsolved crimes for television's DI Jack Frost (A Touch of Frost) to stumble through. Read by David Jason, the star of the television series.

A serial killer is terrorising the senior citizens of Denton, and the local police are succumbing to a flu epidemic. Tired and demoralized, the force has to contend with a seemingly perfect young couple suffering arson attacks and death threats, a suspicious suicidem burgalries, pornographic videos, poison-pen letters ...

In uncertain charge of the investigations is Detetcive Inspector Jack Frost, crumpled, slapdash and foul-mouthed as ever. he tries to cope despite inadequate back-up, but there is never enough time; the unsolved crimes pile up and the vicious killings go on. So Frist has to cut corners and take risks, knowing that his Divisional Commander will throw him to the wovles if anything goes wrong. And for Frost, things always go wrong ...

This title is due for release on August 15, 2005
We'll send you an email as soon as it is available!