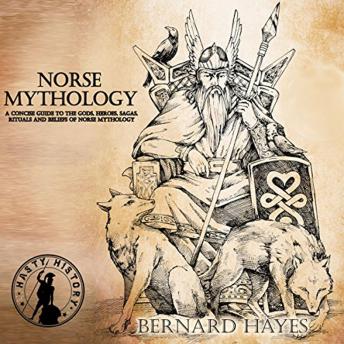 In this audio book, Norse Mythology: A Concise Guide to the Gods, Heroes, Sagas, Rituals, and Beliefs of Norse Mythology, the listener will be transported to the ancient customs of beliefs of the ancient Vikings of the north. This audiobook is dedicated to exploring the gods and goddesses that the Nordic people worshiped.

A description and explanation of the Norse mythological gods and goddesses, and which tribe the gods mentioned belonged toAn introduction to the Nordic pagan belief systems, and the multifaceted ways in which their religious practices were incorporated into their daily livesPopular Nordic sagas, a description of what sagas were, and examples of the most important sagas within the Norse cultureAn explanation of the most revered Norse rituals and celebrations, and how their beliefs left their impression on religious practices that are still held by Christianity todayThe Nordic people had many heroes of myth and legend, and you will be introduced to both stories of myth and living, breathing Viking heroes that were revered. Norse mythology is intricate and complex, and the ideals behind their mythological beliefs were often intertwined with real life events. This audiobook will examine how both myth and fact contributed to the culture and traditions of the Nordic people, and how these influences and stories continue to live on throughout the centuries!