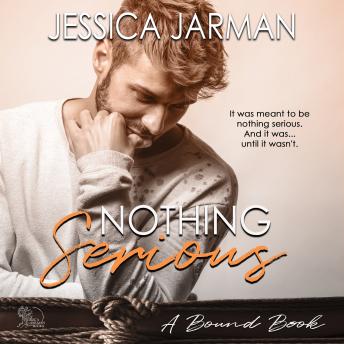 It was meant to be nothing serious. And it was...until it wasn't.

Aaron Stevens likes his life the way it is. As a surgical resident, he is perfectly content with the fact that the precious hours he has outside the hospital revolve around taking care of his mother and sister. He doesn’t have the time or inclination for a serious relationship. So the fact his lover lives halfway around the world and is fine with jetting off to exotic locales a couple times a year for a few weeks of hot sex is as close to perfect as he can get.

The last thing Jack Hayes ever expected when his best friend got involved with an American was to hook up with her son. And he sure as hell never imagined it would continue for as long as it has. For years, he has been at Aaron’s beck and call, satisfied with submitting to him whenever Aaron and his busy life allow. But, after a change in his family’s company that has him looking for a new job, and possibly moving, Jack has begun to examine what he really wants in life and isn’t sure stolen moments here and there are enough anymore.

When Jack arrives to attend Aaron’s sister’s wedding, keeping what he and Aaron have a secret begins to take its toll. Aaron is unwilling to come out to his family, afraid of hurting them and ruining what should be the happiest day of his sister’s life. As much as Jack has come to love Aaron, he can’t bring himself to be the dirty secret in Aaron’s closet. Aaron has a choice to make, because the tighter he holds on to keeping their “nothing serious” arrangement, the closer he comes to losing everything.