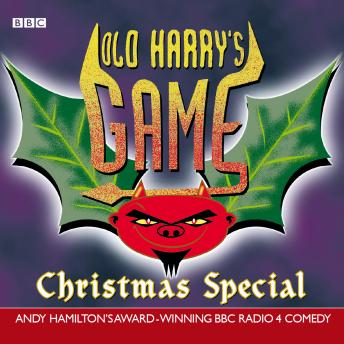 Andy Hamilton, James Grout, Jimmy Mulville and Robert Duncan star in a seasonal, two-part special of Old Harry's Game, the BBC Radio 4 comedy series set in Hell. There's no rest for the wicked and Satan's as busy as ever, especially when a new, extremely beautiful woman called Hope arrives in Hell. When it transpires, however, that she has been sent to the underworld accidentally, even the sardonic Satan begins to melt to her charms. Soon he has embarked on an epic quest to confront Death in order to return her to the land of the living. Helping, or more often hindering, Satan are the Professor, Scumspawn and Thomas who encounter Queen Victoria, Harpo Marx, St Peter, Death (who has a surprisingly strong Welsh accent) - and talking crocodiles. Devilishly good fun to play - that's Old Harry's Game. 'One of the great comic creations of recent years' - Sunday Telegraph. ' one of the best-written comedies around, sustained over its 12 years on the air by brilliant performances and production' - Daily Telegraph.