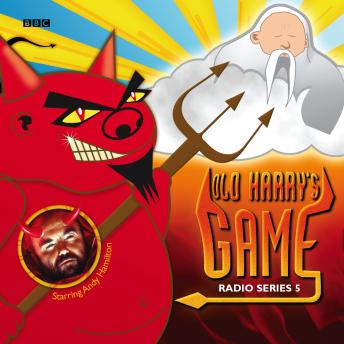 Poor Satan has to undergo yet more trials and tribulations in this fifth series of the Sony Award-winning comedy. What with missing the Professor, a case of Seasonal Affective Disorder, and above all, the disastrous overcrowding in Hell, he hasn’t felt this depressed since Bill Clinton survived his heart operation. Levels of human sin are at their highest ever, and people are dying at an unprecedented rate. The check-in demons are overwhelmed, and Satan has to find a solution. He decides to launch a Crusade of Moral Rearmament, and infiltrates the worlds of religion, sport, politics and the media in an attempt to persuade people to behave better. Meanwhile, a new arrival is fomenting rebellion, aiming to overthrow Satan and take control of Hell... Andy Hamilton stars as Satan with Robert Duncan as Scumspawn, Jimmy Mulville as Thomas and Geoffrey Whitehead as Roland Kingworthy. A fiery furnace of brilliant one-liners and biting satire, Old Harry’s Game is the insider’s guide to Hell. ‘One of the great comic creations of recent years’ - Sunday Telegraph. ' one of the best-written comedies around, sustained over its 12 years on the air by brilliant performances and production' - Daily Telegraph.