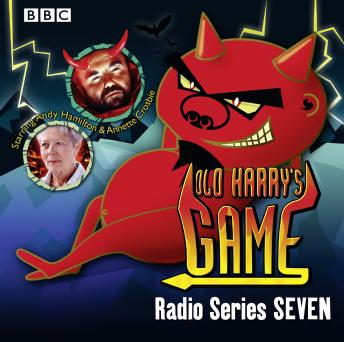 Jean Paul Sartre said, ‘Hell is other people’. But, as Satan will tell you, Hell is actually a fiery, unendingly cruel domain where Oliver Reed can never quite catch the barman’s eye and Yves St Laurent is forced to wear a donkey jacket. But Hell is about to become more hellish for Satan himself (Andy Hamilton). Not only is the historian Edith Barrington (Annette Crosbie) taking for ever to write his biography, An Angel Misunderstood, but everything is thrown into confusion when a dog turns up. Animals aren’t meant to end up in Hell because they’re not evil - well, except for dolphins of course. So why is it here? After much licking, begging and slobbering - mainly from Scumspawn - Satan decides to keep the dog and ask God (Timothy West) what is going on. But God has decided to go on a gap year to find himself. And Hell receives another, even more inexplicable guest... All six episodes from the seventh series of BBC Radio 4’s Sony Award-winning comedy set in Hell. ‘One of the great comic creations of recent years’ - Sunday Telegraph. '... one of the best-written comedies around, sustained over its 12 years on the air by brilliant performances and production' - Daily Telegraph.