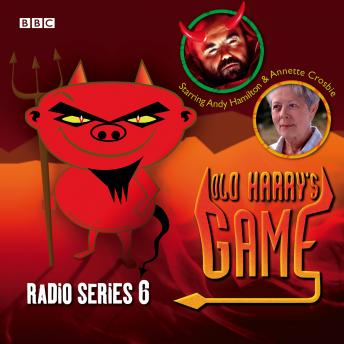 It’s not easy being Satan. There are the long hours (that stretch into eternity), and Hell seems to have more admissions than it can cope with. One of the new arrivals is Edith, a historian, athlete and humanitarian. And she’s trouble: she refuses to believe she’s dead, she knows Thomas and she’s not afraid of Satan. But will the Grand Tour, which includes the Pit of Musicians, the Lake of Fire and the Pit of Health and Safety Inspectors, finally make her realise where she’s ended up? At least Satan still knows how to have his fun: he’s sneaked more teeth into Cherie Blair’s smile.

Written by and starring Andy Hamilton (as Satan), this bestselling series co-stars Annette Crosbie as Edith, Jimmy Mulville as Thomas and Robert Duncan as Scumspawn. A fiery furnace of wicked one-liners and scorching satire, Old Harry’s Game is the insider’s guide to Hell.

‘One of the great comic creations of recent years’ - Sunday Telegraph.