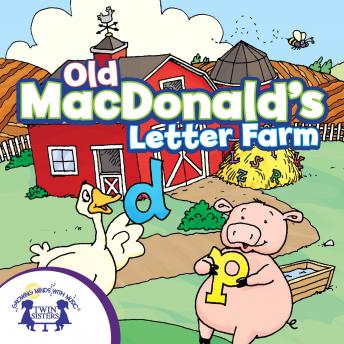 Sing this story! It isn't a secret that using songs to teach children is fun and successful. This original song is heard as a read-along and a sing-along. Simply sing the classic song "Old MacDonald Had A Farm" and "Old MacDonald had a farm, A B C D E. Letters, letters in the hay, F G H I J. With a K L M N O P, pigs and ducks and bumblebees, Q R S T U and V, W X Y Z!" All of your favorite farm friends come to life.The fun Sing A Story series includes: Five Little Monkeys Jumping On The Bed, Old MacDonald Had A Farm, Ten In The Bed, B-I-N-G-O, Down By The Bay, Humpty Dumpty & Other Nursery Rhymes, Six Little Ducks, Five Little Skunks, ABC Nursery Rhymes, The Wheels On The Bus, This Old Man, How Many Ducks?, Old MacDonald's Letter Farm, The ABCs, Singing The Consonant Sounds, The Farmer In The Dell and It's Silly Time!