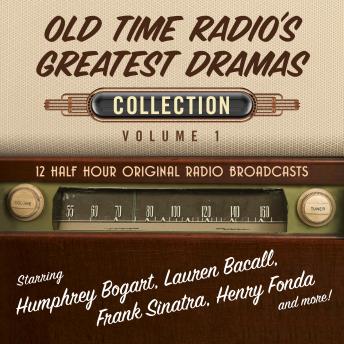 The golden age of radio had incredible drama shows that kept Americans glued to their radio sets. Families gathered around their living room radios to be entertained by the greatest names in Hollywood each and every day. The biggest stars from tinsel-town lent their voices to radio dramas and most of the time the producers and sponsors allowed them to take a curtain call to plug their latest film release. This terrific collection of 12 great radio drama shows includes episodes of Bold Venture starring real-life husband and wife Humphrey Bogart and Lauren Bacall; Rocky Fortune starring Frank Sinatra; Henry Fonda fresh out of the service in his first radio appearance since returning to civilian life on The Cavalcade of America; Brian Donlevy as secret agent Steve Mitchell who is sent on another Dangerous Assignment on behalf of our Government and Dana Andrews stars as real-life counterspy Matt Cvetic who infiltrated a local Communist Party cell and reported back to the FBI on their activities in I Was A Communist for the FBI. You’ll also enjoy episodes of The Big Story, The First Nighter Program, The Adventures of Michael Shayne, The Damon Runyon Theatre, Gang Busters and more!
The Big Story, 5-5-48, 'Pillars of Society' w/ Arnold Moss
The First Nighter Program, 8-6-53, 'Two Loves Had She' w/ Olan Soule and Barbara Luddy
The Camel Screen Guild Theatre, 12-8-49, 'Alias Nick Beal' w/ Broderick Crawford and Ray Milland
Rocky Fortune, 3-30-54, 'Boarding House Double Cross' w/ Frank Sinatra
The Adv. of Michael Shayne, Detective, 7-30-45, 'Museum Thefts' w/ Wally Maher
Big Town, 9-28-48, 'The Trap' w/ Edward Pawley
Bold Venture, 3-26-51, 'Deadly Merchandise' w/ Humphrey Bogart and Lauren Bacall
The Damon Runyon Theatre, 9-26-50, 'The Lemon Drop Kid' w/ John Brown
Dangerous Assignment, 12-30-50, 'When a Friend is Not a Friend' w/ Brian Donlevy
The Cavalcade of America, 10-8-45, 'The Spy on the Kilocycle' w/ Henry Fonda
Gang Busters, 3-13-48, 'The Case of the Mound City Safecrackers' w/ Raymond Edward Johnson
I Was a Communist For the FBI, 6-17-53, 'Abby as in Abigail' w/ Dana Andrews