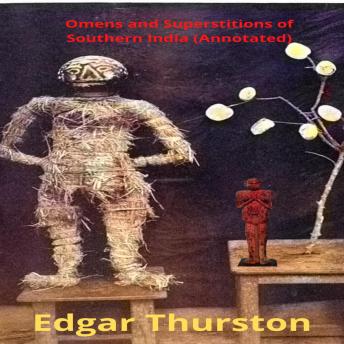 This is the Annotated Version of the Original audio-book. We had tried to annotate this version by adding a summary at the end of the book. We had added approx. 50% to 55% of the Summary worth 48000 approx. words. This book has both the elements of fiction as well as non-fiction.

We are offering this audio-book at 50% discount as a promotional activity.

As the Name Suggest this book describes all the omens and superstitions as well as culture, traditions, and lifestyle of some part in Southern Indian society.

It is recorded,1 in connection with the legends of the Badagas of the Nīlgiris, that “in the heart of the Banagudi shola (grove), not far from the Doddūru group of cromlechs, is an odd little shrine to Karairāya, within which are a tiny cromlech, some sacred water-worn stones, and sundry little pottery images representing a tiger, a mounted man, and some dogs. For instance, ashes, firewood, oil, and a lot of similar objects, are inauspicious ones, which will render him who chances to notice them first fare badly in life for the whole year, and their obnoxious effects will be removed only on his seeing holy things, such as reigning princes, oxen, cows, gold, and such like, on the morning of the next new year. In the Teluga country it is believed that a child who sneezes on a winnowing fan, or on the door-frame, will meet with misfortune unless balls of boiled rice are thrown over it; and a man who sneezes during his meal, especially at night, will also be unlucky unless water is sprinkled over his face, and he is made to pronounce his own name, and that of his birthplace and his patron deity.