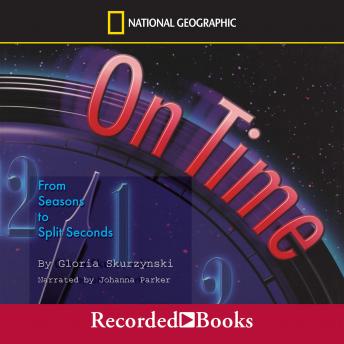 On Time: From Seasons to Split Seconds

Stars, sundials, hour glasses, wrist watches, pendulum clocks, atomic clocks-all of these have been used to keep time. Whether recording split seconds, seasons, years or centuries, human beings have always tried to find the best and most accurate way to chronicle the passing of time. In prehistoric times, early humans had only the signs of nature to keep track of when it was time to hunt, forage, or take shelter. Then came the rock formations at Stonehenge, the Roman sundials, and the Mayan astronomical calendars. Today, scientists have instruments than can precisely clock time down to the nanosecond. How timekeeping progressed from its first simple steps to its modern accuracy is an incredible story that will forever capture the imagination. Teamed with the National Geographic Society, author Gloria Skurzynski-a recipient of the American Institute of Physics Children's Science-Writing Award-presents a fascinating and exciting history of timekeeping in On Time. A riveting reading by narrator Johanna Parker will thoroughly captivate listeners. '... appealing and informative with ... a nice progression of thought.'-Dr. France A. COrdova, former NASA Chief Scientist

On Time: From Seasons to Split Seconds