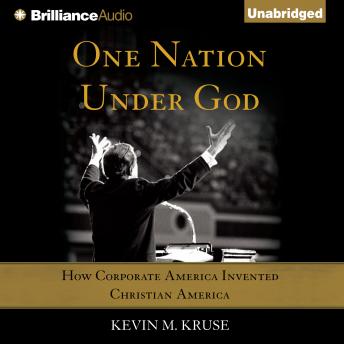 One Nation Under God

Conventional wisdom holds that America has been a Christian nation since the Founding Fathers. But in One Nation Under God, historian Kevin M. Kruse argues that the idea of “Christian America” is nothing more than a myth—and a relatively recent one at that. The assumption that America was, is, and always will be a Christian nation dates back no further than the 1930s, when a coalition of businessmen and religious leaders united in opposition to FDR’s New Deal. With the full support of Dwight Eisenhower in the 1950s, these activists—the forerunners of the Religious Right—propelled religion into the public sphere. Church membership skyrocketed; Congress added the phrase “under God” to the Pledge of Allegiance and made “In God We Trust” the country’s official motto. For the first time, America became a thoroughly religious nation. Provocative and authoritative, One Nation Under God reveals how the comingling of money, religion, and politics created a false origin story that continues to define and divide American politics today.

One Nation Under God