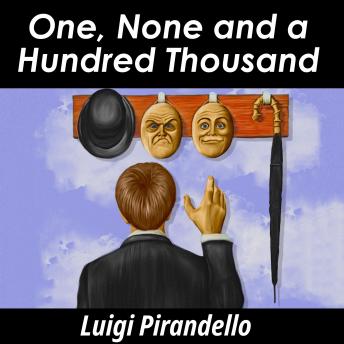 One, None and a Hundred Thousand

Pirandello began writing it in 1909. In an autobiographical letter, published in 1924, the author refers to this work as the '[B]itterest of all, profoundly humoristic, about the decomposition of life.'

Vitangelo, the protagonist, discovers by way of a completely irrelevant question that his wife poses to him that everyone he knows and everyone he has ever met has constructed a Vitangelo persona in their own imagination and that none of these personas corresponds to the image of Vitangelo that he himself has constructed and believes himself to be.

The listener is immediately immersed in a cruel game of confusing projections, mirroring the reality of social existence itself, which imperiously dictate their rules. As a result, the first, ironic 'awareness' of Vitangelo consists in the knowledge of that which he definitely is not; the preliminary operation must therefore consist in the spiteful destruction of all of these fictitious masks.

One, None and a Hundred Thousand