Only Fools And Horses 4 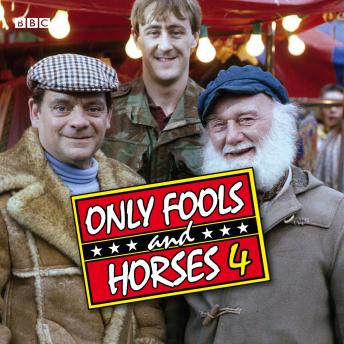 The episodes included are: 'It’s Only Rock and Roll' - 14 March 1985, 'Sleeping Dogs Lie' - 21 March 1985, 'Watching the Girls Go By' - 28 March 1985 and 'Who Wants to Be a Millionaire?' - 5 October 1986. Lovely jubbly! Del, Rodney and the boys are back in another pukka selection of shows. 'It’s Only Rock and Roll' sees Rodney’s aspirations to be ‘top of the pops’ encouraged, promoted - and totally destroyed by Del Boy, whereas, in 'Sleeping Dogs Lie', Del, Rodney and Uncle Albert are consigned to the dog watch. In 'Watching the Girls Go By', Rodney is taking some stick from the lads down the pub about his ‘imaginary’ girlfriend and Mickey Pearce bets him that he won’t bring a girl to the Saturday night bash in The Nag’s Head. However, with Del’s help, some home truths are stripped bare by Rodney’s new date. 'Who Wants to Be a Millionaire?' sees Jumbo Mills, an old friend of Del’s, offer him a share in his successful company. It’s a chance of a lifetime, but it also involves a move to Australia for the Trotter family... You’d be a plonker to miss these comic classics!

Only Fools And Horses 4