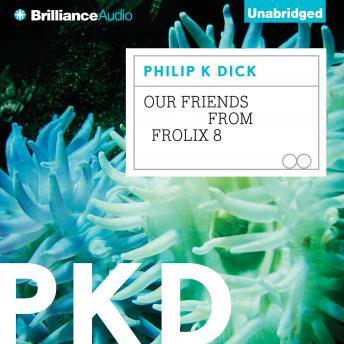 Our Friends from Frolix 8

In Our Friends from Frolix 8, the world is run by an elite few. And what determines whether one is part of the elite isn't wealth or privilege, but brains. As children, every citizen of Earth is tested; some are found to be super-smart New Men and some are Unusuals, with various psychic powers. The vast majority are Undermen, performing menial jobs in an overpopulated world. Nick Appleton is an Underman, content to go with the flow and eke out an existence as a tire regroover. But after his son is classified as an Underman, Appleton begins to question the hierarchy. Strengthening his resolve, and energizing the resistance movement, is news that the great resistance leader Thors Provoni is returning from a trip to the furthest reaches of space. And he's brought help: a giant, indestructible alien.

Our Friends from Frolix 8