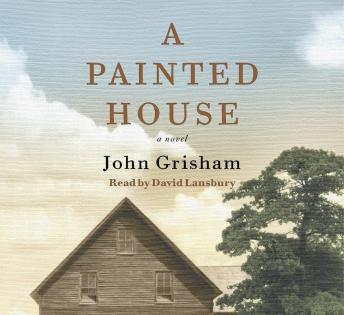 A Painted House: A Novel

The hill people and the Mexicans arrived on the same day. It was a Wednesday, early in September 1952. The Cardinals were five games behind the Dodgers with three weeks to go, and the season looked hopeless. The cotton, however, was waist-high to my father, over my head, and he and my grandfather could be heard before supper whispering words that were seldom heard. It could be a "good crop."

Thus begins the new novel from John Grisham, a story inspired by his own childhood in rural Arkansas. The narrator is a farm boy named Luke Chandler, age seven, who lives in the cotton fields with his parents and grandparents in a little house that's never been painted. The Chandlers farm eighty acres that they rent, not own, and when the cotton is ready they hire a truckload of Mexicans and a family from the Ozarks to help harvest it.

For six weeks they pick cotton, battling the heat, the rain, the fatigue, and, sometimes, each other. As the weeks pass Luke sees and hears things no seven-year-old could possibly be prepared for, and finds himself keeping secrets that not only threaten the crop but will change the lives of the Chandlers forever.

A Painted House is a moving story of one boy's journey from innocence to experience.

I was quite surprised how much I did enjoy this book. As a big fan of John Grisham's "law-type" books, I was afraid this would let me down but I got a kick out of the book.

Normal good writing by John G, just not the most riveting book I have read of Grisham’s But a enjoyable escape to a different world.

Great book about the south.

Based on how enjoyable his movies can be i am surprised how dull and boring this book turned out to be. Ir is unfortunate that this was my first book by him because now I am hesitant to read others by him.

John Grisham had a very unusually vivid memory of his youth!

I've listened to this book numerous times! This is one of those love it or hate it books, there is no in between. I personally love it

I was sad when the book ended. I wanted to hear more of young Luke's life in the north.

As a departure from Grisham's usual fare, I thought this was good. It was a slow walk in rural Arkansas in the 1950's, through the eyes of a 7 year old. There was plenty of variety, even for slow-action. I felt like I got a bird's eye view into life on the farm and in the country, with an appreciation of how things "worked". I agree with the reader who said the ending was a bit anti-climatic, but I was engaged completely until then. The narration was very good, nice change up of voices.

I am a John G fan. This particular book does not hit the mark. It is to unbelievable. Some of it is on target, but the main character is not. In my opinion he is to young for all of the happenings

A departure for Grisham and I really enjoyed it. Unabashed view of the life of farmers (laborers) in any era. Hard choices make hard people and I appreciated the candid portrayal of the grandfather. Good narration also.

This is another of Grisham's best. It is a little different. No lawyers, but it still is in the same country area. I really enjoyed reading this one and believe you will also.

I loved this book - didnt want it to end and I couldnt stop listening to it. Heard the whole thing in one day !

Interesting insight into life growing up in rural Arkansas before the exodus to the city. Not a book I would recommend to purchase but as far as audio books go, beats listening to the radio.

Looking at life through the eyes of a 7 year old in a simple and naive manner- but experiencing hard life lessons and violent realities- I think Grisham did a fantastic job!

Back when my son refused to read anything of substance, this book opened up a world he was completely unaware of. He hasn't put down a book since. I loved the story because it allowed the family to share a common interest: visiting other places between the covers of a book. As adults, both his father and I adored the book's simplicity, authentic affection for the subject, and style.

This is not your usual Grisham fair. Not a courthouse or lawyer in sight. Instead we have a sweetly rendered coming of age story set in rural Arkansas during the 1950s. The central character, a young boy named Luke, witnesses a collision of human events brought on by the cotton harvest and unforgiving rains. Crimes, public and personal, provide the primary moments of tension in the story, but none of them are prosecuted, and no criminal is punished via the legal system. Nonetheless, the book presents a study in human justice and injustice, as Luke sees the ways in which the adults around him deal with the various pressures and disappointments in their lives. After some very engaging conflicts and finely drawn character portraits, the ending is a bit anti-climactic, but the trip there is still worth the price of admission.

This non-courtroom Grisham novel starts off slowly but picks up an even pace toward the middle of the book. There's plenty of subplots going on to keep the story from becoming stale and overall it was a nice, enjoyable book. Not thrillingly suspenseful, but sweetly reminiscent of an eventful summer in a young boys life.