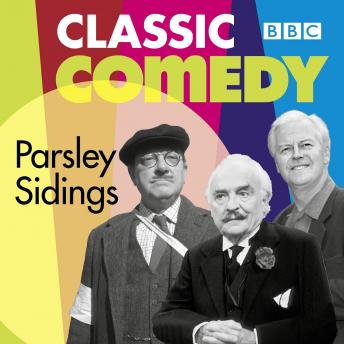 Arthur Lowe, Kenneth Connor and Ian Lavender star in four episodes of the radio comedy series set in a sleepy railway station. Featuring Arthur Lowe and Ian Lavender from Dad's Army, and Kenneth Connor (from the Carry On films), these recordings are among the few remaining episodes available. Goodbye Parsley Sidings (Series 1, Episode 10): Horace Hepplewhite gets promoted and leaves for pastures new, but his replacement seems a right old ogre. The Entente Cordiale (Series 2, Episode 3): After an exchange visit to France, the Head of French Rail is keen to see Gloria's tannoy. A Night Out (Series 2, Episode 4): Thanks to Percy and Bert, a lady misses the last train to Birmingham and has nowhere to stay the night. The New Level Crossing (Series 2, Episode 8): What will happen to Bradshaw now that Parsley Sidings gets a new automated level crossing?