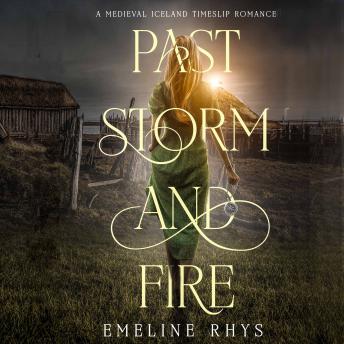 Past Storm and Fire

Escape can embolden your soul - or destroy it.

Val Masterson created Vigdis in order to escape the drudgery of her life. Instead, Vigdis starts living it.

Val and Karl's house is destroyed by a hurricane and her husband reveals he can't have children. These catalysts inspire her to write a historical romance novel set in Iceland, rife with sorcery, sexy Vikings, a big family, and a volcano. Val's dreams reveal historical details she can't possibly know, details which prove to be factual, which both frightens and intrigues her.

Her obsession with writing puts a strain on her already troubled marriage, but she's terrified of being on her own. In her novel, Val becomes Vigdis. She evades two amorous brothers and their sorcerous, drunken father. The brothers fight a duel, forcing her to make a very public choice between them. Their father refuses to bide by her choice and tries to use black magic to enchant her. A volcanic eruption throws their entire world into ash and fire.
The line between past and present grow blurred as Vigdis lives everything Val dreams of - true love, children, and family. An attractive Icelandic professor of history helps Val investigate the history behind her visions, but her husband draws the line - give up her writing or he'll leave. Val must decide whether to resurrect the shambles of her marriage or take her chance in Iceland to discover if her dreams truly do come from the past.

Can she find vicarious solace and satisfaction in her fictional creation? Or will the escape take over and subsume her?

Past Storm and Fire