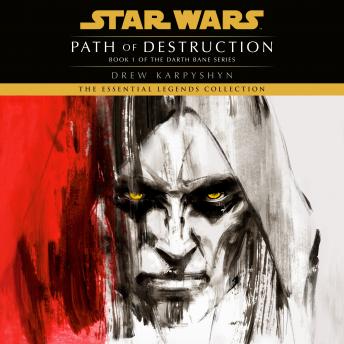 Once the Sith order teemed with followers. But their rivalries divided them in endless battles for supremacy. Until one dark lord at last united the Sith in the quest to enslave the galaxy–and exterminate the Jedi. Yet it would fall to another, far more powerful than the entire Brotherhood of Darkness, to ultimately realize the full potential of the Sith, and wield the awesome power of the dark side as never before.


Since childhood, Dessel has known only the abuse of his hateful father and the dangerous, soul-crushing labor of a cortosis miner. Deep in the tunnels of the desolate planet Apatros, endlessly excavating the rare mineral valued throughout the galaxy, Dessel dreams of the day he can escape–a day he fears may never come. But when a high-stakes card game ends in deadly violence, Dessel suddenly finds himself a wanted man.

On the run from vengeful Republic forces, Dessel vanishes into the ranks of the Sith army, and ships out to join the bloody war against the Republic and its Jedi champions. There, Dessel’s brutality, cunning, and exceptional command of the Force swiftly win him renown as a warrior. But in the eyes of his watchful masters, he is destined for a far greater role in the ultimate Sith plan for the galaxy–if he can prove himself truly worthy.

As an acolyte in the Sith academy, studying the secrets and skills of the dark side at the feet of its greatest masters, Dessel embraces his new Sith identity: Bane. However the true test is yet to come. In order to gain acceptance into the Brotherhood of Darkness one must fully surrender to the dark side through a trial by fire that Bane, for all his unquenchable fury and lust for power, may not be strong enough to endure . . . especially since deception, treachery, and murder run rampant among the Sith disciples, and utter ruthlessness alone is the key to survival. Only by defying the most sacred traditions, rejecting all he has been taught, and drawing upon the long-forgotten wisdom of the very first Sith can Bane hope to triumph–and forge from the ashes of that which he must destroy a new era of absolute dark power.