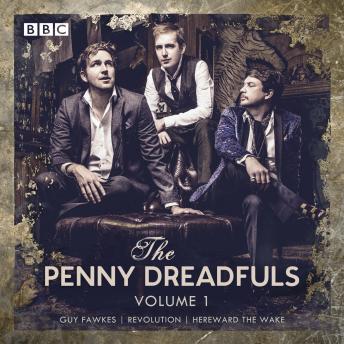 The Penny Dreadfuls examine the life of Guy Fawkes, undertake a satirical version of the French Revolution and turn their comic eye towards Hereward the Wake

Guy Fawkes: What exactly are we supposed to remember on the 5th of November? The Penny Dreadfuls take a fresh look at the build-up to and aftermath of the Gunpowder Plot. Starring Kevin Eldon as Guy.

Revolution: The Penny Dreadfuls tell the epic story of the French Revolution – including the execution of the King and the slaughter of thousands at the guillotine – in just one hour, with jokes. Starring Richard E Grant as Robespierre and Sally Hawkins as Marie-Therese.

Hereward the Wake: Why has this Englishman, responsible for leading the fight against the occupation of William The Conqueror, been forgotten? The Penny Dreadfuls explain how the story didn't end when they ran out of embroidery cotton on the Bayeux Tapestry...

This title is due for release on January 19, 2017
We'll send you an email as soon as it is available!