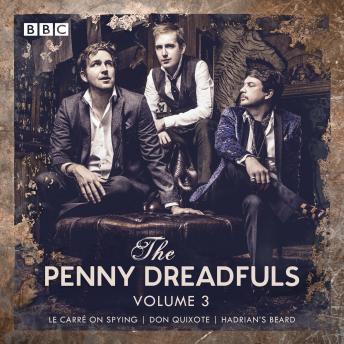 In The Penny Dreadful’s Present: Le Carré on Spying, we follow David Cornwell’s (Le Carré’s real name) desperate efforts to uncover the latest mole in the secret service. John F Kennedy's official visit to Berlin looms and the pressure is on to get to the truth.

In The Penny Dreadful’s Present: Don Quixote, Cervantes' mighty tome has been condensed into an hour's entertainment. Join peasant Sancho and the man who thinks he's a Knight, locked in a quest to save those who don't want saving and unravel enchantments which may or may not only exist in their minds.

The Penny Dreadful’s Present: Hadrian’s Beard, Emperor Hadrian’s instinct is to protect himself and Rome with a wall across England, but if he does build one won't the locals just go around it in little boats?