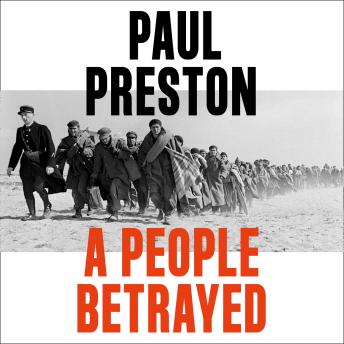 A People Betrayed: A History of Corruption, Political Incompetence and Social Division in Modern Spain 1874-2018

From the foremost historian of 20th century Spain, A People Betrayed is the story of the devastating betrayal of Spain by its political class, its military and its Church.

This comprehensive history of modern Spain chronicles the fomenting of violent social division throughout the country by institutionalised corruption and startling political incompetence. Most spectacularly during the Primo de Rivera and Franco dictatorships, grotesque and shameless corruption went hand-in-hand with inept policies that prolonged Spain’s economic backwardness well into the 1950s.


A People Betrayed looks back to the years prior to 1923 when electoral corruption excluded the masses from organized politics and gave them a choice between apathetic acceptance and violent revolution. Bitter social conflict, economic tensions and conflict between centralist nationalism and regional independence movements then exploded into the civil war of 1936-1939.


It took the horrors of that war and the dictatorship that followed to break the pattern. The moderation shared by the progressive right and a chastened left underlay a bloodless transition to democracy after 1975. Yet, as before, corruption and political incompetence continued to have a corrosive effect on political coexistence and social cohesion.


Sparkling with vivid portraits of politicians and army officers, some corrupt and others clean, recounting the triumphs and disasters of Kings Alfonso XIII and Juan Carlos, A People Betrayed unravels the mystery of why both right and left have been unable or unwilling to deal with corruption and the pernicious clash between Spanish centralist nationalism and regional desires for independence.

Accurate about the ills that affect Spanish society. Highly detailed. Narrator could have been more effective if he had been given more guidance on how to pronounce names of people and places, and had done so consistently.