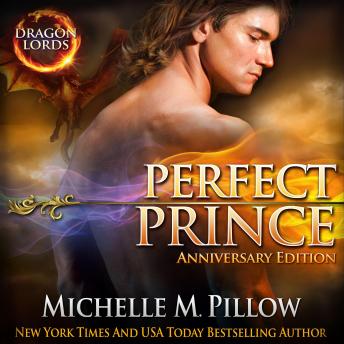 NYT & USAT Bestselling Author
Dragon Shapeshifter Sci Fi Paranormal RomanceThe original Dragon Lords series' Anniversary Edition by NYT Bestselling Author, Michelle M. Pillow.
A Perfect Escape...
Nadja Aleksander has everything she could ever want in life, except her freedom. Skipping out on her engagement to a man her controlling father has chosen for her, Nadja books passage on the first ship she can find. Bound for a planet of primitive humanoid males, she plans on finding a simple, hardworking man who will allow her to live out her days in total obscurity. Unfortunately, simple isn't what fate has in mind.
A Perfect Mistake...
Dragon shifter Prince Olek is pleased with his refined and blushing bride. When she chooses him to be her life mate, appearing happy in her decision, his heart soars--until the next morning when his new princess wants nothing to do with him. The alpha male prince doesn't know what he's done to upset his alluring woman, but he is determined to reignite the hot sparks that burned the night they met.

What readers are saying...REVIEWER CHOICE! 5 Stars! 'Ms. Pillow's strong characters, fast-paced plot, and steamy sexual encounters made this an outstanding book... Ms. Pillow's talent for storytelling is sure to make her a renowned author of the romance genre.' - Sizzling Romance
'Olek should really leave his mate for me. I was totally made for him.' - NYT Bestselling Author Mandy M. Roth

This title is due for release on September 24, 2014
We'll send you an email as soon as it is available!