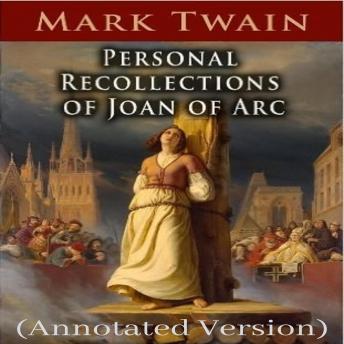 This is the annotated version of the original audio-book. This is a large file audio-book. We had added summary of approximate 110000 words at the end of the audio-book. This book has both fiction and non fiction elements. We had bifurcated the main part and summary part simultaneously. We are offering this book at about 50% discount as a promotional activity.

On 23 May 1430, she was captured at Compiègne by the Burgundian faction, a group of French nobles allied with the English. She was later handed over to the English[6] and put on trial by the pro-English bishop Pierre Cauchon on a variety of charges. After Cauchon declared her guilty, she was burned at the stake on 30 May 1431, dying at about nineteen years of age.In 1456, an inquisitorial court authorized by Pope Callixtus III examined the trial, debunked the charges against her, pronounced her innocent, and declared her a martyr. In the 16th century she became a symbol of the Catholic League, and in 1803 she was declared a national symbol of France by the decision of Napoleon Bonaparte. She was beatified in 1909 and canonized in 1920. Joan of Arc is one of the nine secondary patron saints of France, along with Saint Denis, Saint Martin of Tours, Saint Louis, Saint Michael, Saint Rémi, Saint Petronilla, Saint Radegund and Saint Thérèse of Lisieux. Joan of Arc has remained a popular figure in literature, painting, sculpture, and other cultural works since the time of her death, and many famous writers, playwrights, filmmakers, artists, and composers have created, and continue to create, cultural depictions of her.