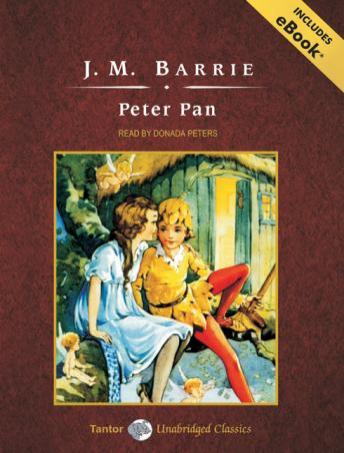 Peter Pan first flew across a London stage in 1904, overwhelming audiences with its tale of a magical boy who never grows up, who lures young Wendy and her brothers to Neverland, where they meet pirates, Indians, fairies, and the Lost Boys. J. M. Barrie revised and expanded the story and published it as this novel. For children, it remains a marvelous mix of fantasy and adventure, featuring unique, imaginative characters who frisk and frolic in an enchanting land.

For adults, the story of Peter and the Lost Boys works on a much deeper level, speaking to them about the inevitable loss of childhood and the ability 'to fly.' The climactic duel between Peter Pan and Captain Hook is both a swashbuckling romp and a moving metaphor for the complex, poignant struggle between innocent but irresponsible youth and tainted but dependable maturity.