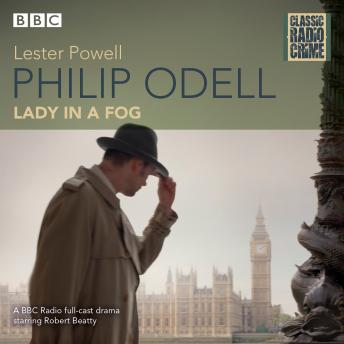 Robert Beatty stars as Philip Odell in this eight-part serial, first broadcast on BBC Radio in 1958.
Irish private eye Philip Odell made his debut on the BBC Light Programme in 1947. Such was the popularity of the eponymous radio detective that the series - which ran until 1961 - spawned several novels and even a 1952 feature film.
In this thrilling serial, Odell is en route from London to Dublin when he makes a date with old friend Heather McMara. But he finds himself mixing business with pleasure when she asks for his help. Her brother Ricky was recently found drowned, and she suspects murder. Reluctantly, Odell agrees to investigate.
The key to the mystery seems to be a mysterious lady in a mink coat - but as the body count rises, can Odell find her and discover the truth?
Published here for the very first time, this full-cast drama by Lester Powell features Robert Beatty as Odell, with Sheila Manahan as Heather McMara. Among the supporting cast are Mary Wimbush, James Thomason, John Bennett, Jeffrey Segal, June Tobin, David March, Trevor Martin and members of the BBC Drama Repertory Company.
Classic Radio Crime: presenting vintage detectives for your investigation!
Duration: 3 hours 50 mins approx.