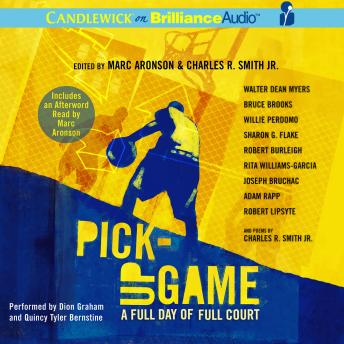 It's one single steamy July day at the West 4th Street Court in NYC, otherwise known as the Cage. Hotshot baller ESPN is wooing the scouts, Boo is struggling to guard the weird new guy named Waco, a Spike Lee wannabe has video rolling, and virgin Irene is sizing up six-foot-eight-and-a-half-inch-tall Chester. Nine of YA literature's top writers reveal how it all goes down in this searing novel in short stories that ingeniously pick up where the last one ends. Characters weave in and out of narratives, perspectives change, and emotions play out for a fluid and fast-paced ode to the game. Crackling with humor, grit, and streetball philosophy, and featuring poems by Charles R. Smith Jr., this anthology is a slam dunk. Who's got next? One day One court Ten voices