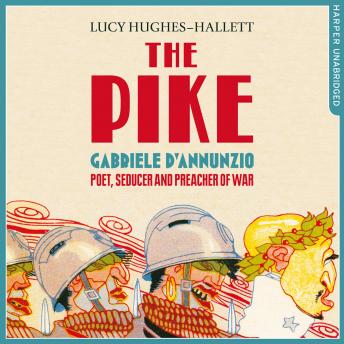 The Pike: Gabriele d’Annunzio, Poet, Seducer and Preacher of War

THE TIMES BIOGRAPHY OF THE DECADE


WINNER OF THE 2013 SAMUEL JOHNSON PRIZE FOR NON-FICTION


WINNER OF THE 2013 COSTA BOOK AWARDS BIOGRAPHY OF THE YEAR

The story of Gabriele D’Annunzio, poet, daredevil – and Fascist.


In September 1919 Gabriele D’Annunzio, successful poet and occasional politician, declared himself Commandante of the city of Fiume in modern-day Croatia. His intention – to establish a utopia based on his fascist and artistic ideals. It was the dramatic pinnacle to an outrageous career.


Lucy Hughes-Hallett charts the controversial life of D’Annunzio, the debauched artist who became a national hero. His evolution from idealist Romantic to radical right-wing revolutionary is a political parable. Through his ideological journey, culminating in the failure of the Fiume endeavour, we witness the political turbulence of early 20th-century Europe and the emergence of fascism.


In The Pike, Hughes-Hallett addresses the cult of nationalism and the origins of political extremism – and at the centre of the book stands the charismatic D’Annunzio: a figure as deplorable as he is fascinating.