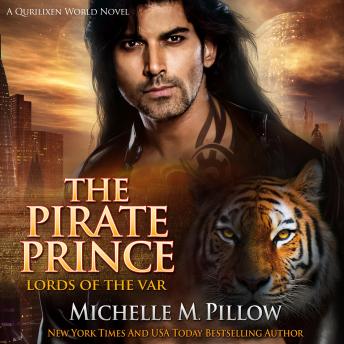 '5 STARS! A rollicking tale of futuristic adventure and romance... one of my new favorites!'

Cat-shifter Pirate Prince Jarek sails the high sky in his spaceship doing as he pleases… that is until intergalactic drug dealers take his pilot hostage. But the rescue mission goes wrong when, instead of a crewman, he liberates a woman who he believes is desperately trying to escape her captors.

Princess Mei has just learned her future from a psychic, and it seems fate is giving her in marriage to a neighboring ruler. She will do her duty, but first, she wants to experience an adventure. When the alien pirate comes to steal, she knows precisely which alpha male she wants that adventure to be with.


About Lords of the Var Series

The cat-shifter princes were raised to not believe in love, especially love for one woman, and they will do everything in their power to live up to their father’s expectations. Oh, how the mighty will fall.

5 ANGELS! Michelle Pillow has done an amazing job at incorporating multiple emotions and dangers within this plot, offering readers an explosive experience upon completion. I would highly recommend this story! ' - Fallen Angel Reviews

'5 STARS! A rollicking tale of futuristic adventure and romance... The Pirate Prince is one of my new favorites!' - JERR

Part of the Qurilixen World

​Lords of the Var Series