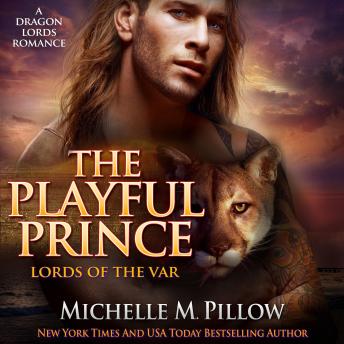 NYT & USAT Bestselling Author
Cat-Shifter Paranormal Sci Fi Romance Part of the award winning Qurilixen World by NYT & USAT Bestselling Author Michelle M. Pillow
5 Stars! 'I was held captive by every word'
Cat shifter Prince Quinn isn't looking for a serious relationship. In fact, he's never even considered it. He's content to enjoy life to the fullest, never taking anything but his royal duties seriously. However, when a new scientist arrives on his planet to test for biological weapons, he can't seem to stay away from her.
Dr. Tori Elliot is at the palace to do a job and no matter what she's going to act like a professional... which means not succumbing to the seductively playful alpha male prince.

What reviewers are saying...'Some of the characters may be familiar, but the love story is not; this is a brand-new adventure..touching and humorous. The plot twists will entertain old and new readers alike.' - Romantic Times Magazine
'An awesome story and I couldn't put it down until I finished it.' - The Romance Studio
'5 CUPS! Ms. Pillow weaves love into a tale of survival with a generous portion of humor. ... written with a style uniquely belonging to the author.' Coffee Time Review