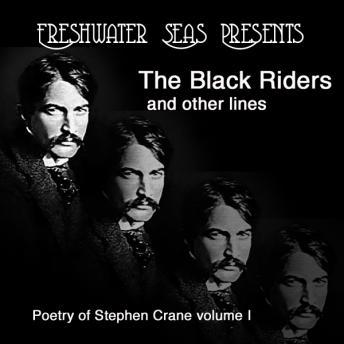 Poetry of Stephen Crane I - The Black Riders

In 1894, when Stephen Crane was just twenty-two years old, he showed his friend, Hamlin Garland, a set of poems in manuscript. Garland showed them to John D. Barry, who arranged for a public reading of the new work. Crane could not summon up the courage to read the poems, or even attend the reading; he waited outside on the street while Barry read them. The publishing firm of Copeland and Day took on the work, and Stephen Crane was a published poet. Six months later, The Red Badge of Courage appeared, and Stephen Crane's literary career was on its way. He still didn't have enough money to live on, but his work had reached the public. Just six years later, he was dead of tuberculosis.
Today, over a hundred years later, his poems are incredibly fresh. Torn by a sense of his own sin, outraged by the capricious behavior of a God he rejected, his poems brim with bitteness, yet carry with them a sane and sarcastic humor as well. Tremendously laconic and always moving directly to the point, he demands his listener's full attention, and rewards it.

Poetry of Stephen Crane I - The Black Riders

This title is due for release on June 4, 2008
We'll send you an email as soon as it is available!