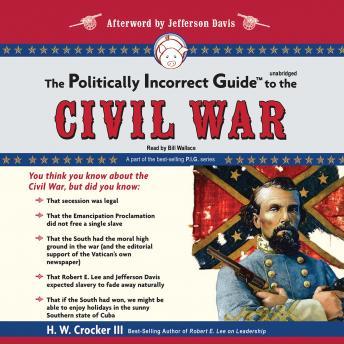 The Politically Incorrect Guide to the Civil War

Think you know the Civil War? You won’t know the full story until you read this book, a quick and lively study of America’s own Iliad, a provocative and entertaining addition to the Politically Incorrect Guide series.
Get ready for a rousing rebel yell as bestselling author H. W. Crocker III charges through bunkers and battlefields in The Politically Incorrect Guide to the Civil War. Crocker busts myths and shatters stereotypes as he profiles eminent and colorful military generals, including the noble Lee, the controversial Sherman, the indefatigable Grant, the legendary Stonewall Jackson, and the notorious Nathan Bedford Forrest. Along the way he reveals little-known truths, like why Robert E. Lee had a higher regard for African Americans than Lincoln did; how, if there had been no Civil War, the South would have abolished slavery peaceably; and how the Confederate States of America might have helped the Allies win World War I sooner. Crocker culminates his tome in the most politically-incorrect chapter of all: “What If the South Had Won?” This is the PI Guide that every Civil War buff and Southern partisan will want on their bookshelf, in their classroom, and under their Christmas tree.