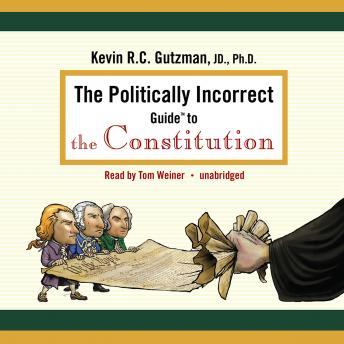 The Politically Incorrect Guide to the Constitution

While the government claims to be a representative republic, somehow hot-button topics from gay marriage to the allocation of Florida’s presidential electors always seem to be decided by unelected judges. What gives them the right to decide such issues? The judges say it’s the Constitution.
Author and law professor Kevin Gutzman shows that there is very little relationship between the Constitution ratified by the thirteen states more than two centuries ago and the “constitutional law” imposed upon us since then. Instead of the intended system of state-level decision makers and elected officials, judges have given us a centralized system in which bureaucrats and appointed officials make most of the important policies.
The Constitution guarantees our rights and freedoms, but activist judges are threatening those very rights because of the Supreme Court’s willingness to substitute its own opinions for the perfectly constitutional laws enacted by “we, the people” through our elected representatives.
As Professor Gutzman shows, constitutional law is supposed to apply the Constitution’s plain meaning to prevent judges, presidents, and congresses from overstepping their authority. If we want to return to the Founding Fathers’ vision of the Republic, if we want the Constitution enforced in the way it was explained to the people at the time of its ratification, then we have to overcome the “received wisdom” about what constitutional law is. The Politically Incorrect Guide to the Constitution is an important step in that direction.

Politically Incorrect Guide to the Constitution