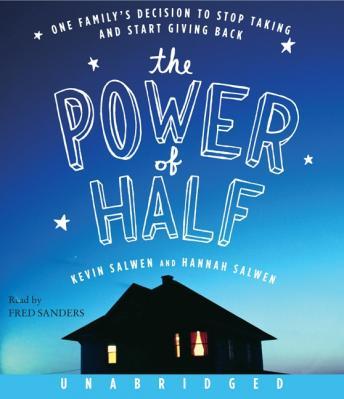 The Power of Half

It all started when fourteen-year-old Hannah Salwen had a eureka moment. Seeing a homeless man in her neighborhood at the same instant she spotted a man driving a glistening Mercedes, she said, 'Dad, if that man had a less nice car, that man there could have a meal.'

Until that day, the Salwens had been caught up like so many of us in the classic American dream'providing a good life for their children, accumulating more and more stuff, doing their part to help others but not really feeling it. So when Hannah was stopped in her tracks by this glaring disparity, her parents knew they had to act on her urge to do something. As a family, they made the extraordinary decision to sell their Atlanta mansion, buy a house half its size, and give half of the sale price to a worthy charity. At first it seemed outlandish: What, are we crazy? Then it became a challenge: We are totally doing this. Their plan eventually took them across the globe and well out of their comfort zone. In the end they learned that they had the power to change a little corner of the world. And they found themselves changing too.

As Kevin Salwen says, 'No one else is nuts enough to sell their house,' but what his family discovered along the way will inspire countless others, no matter what their means or resources are. Warm, funny, and deeply moving, The Power of Half is the story of how one family grew closer as they discovered that half could be so much more.
The power of The Power of Half

'Mixing humor, inspiration, and self-reflection, The Power of Half will give you a whole new perspective on your life. You can't help but recommit to the values you want to share with your children. And you'll be reminded that your kids have much to teach you, too.''Jeffrey Zaslow, coauthor of The Last Lecture and The Girls from Ames

'The Power of Half is not just an extraordinary story of a fourteen-year-old girl who pushes her family to look outside themselves and give something big back to the world. The Salwens set a new standard for families and individuals seeking to inject meaning into their lives. What does your family stand for? What 'half' are you willing to give? Read this book'it will change your life.''Daniel H. Pink, author of A Whole New Mind and Drive

'The Power of Half is a story of generosity become realized'a family's unpretentious, morally introspective life becomes a fulfillment of an old ethical and spiritual imperative: that in giving we receive.''Dr. Robert Coles

'Americans are the world's most generous people, but, as The Power of Half shows, the Salwen family is lifting hearts in a new way. Who knew Siddhartha lived in the suburbs, Mother Teresa wore volleyball kneepads, and the Buddha could emerge from his dream at a traffic light: When the heart is full, give half.''Michael Capuzzo, author of Close to Shore and The Murder Room

'The Power of Half proves so much about leadership. Most important, that leadership comes in all ages, as long as there is a decision made to let it out and foster it. Hannah and her family inspire me.''Alicia Mandel, former director of training, U.S. Olympic Committee