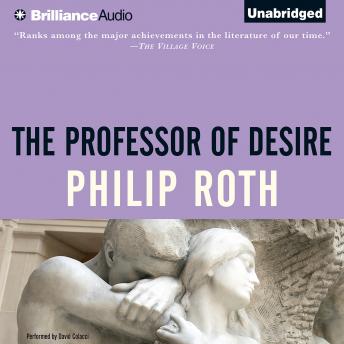 The Professor of Desire

As a student in college, David Kepesh styles himself “a rake among scholars, a scholar among rakes.” Little does he realize how prophetic this motto will be—or how damning. For as Philip Roth follows Kepesh from the domesticity of childhood into the vast wilderness of erotic possibility, from a ménage à trois in London to the throes of loneliness in New York, he creates a supremely intelligent, affecting, and often hilarious novel about the dilemma of pleasure: where we seek it; why we flee it; and how we struggle to make a truce between dignity and desire.
“Philip Roth is a great historian of modern eroticism. . . . [He] speaks of a sexuality that questions itself; it is still hedonism, but it is problematic, wounded, ironic hedonism. His is the uncommon union of confession and irony. Infinitely vulnerable in his sincerity and infinitely elusive in his irony.” —Milan Kundera
“A thoughtful . . . elegant novel. . . . A fine display of literary skills.” —The New York Times Book Review