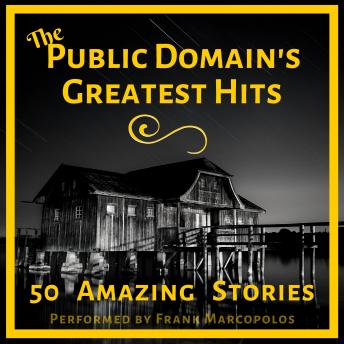 'When you read (or listen to) a short story, you come out a little more aware and a little more in love with the world around you.' ~ George Saunders


Here you will find 50 of the greatest public-domain short stories ever written, as curated by the staff of The Bookquarium, all performed by Frank Marcopolos. ('Thee perfect voice for audiobooks--it is so listenable!' said one reviewer.)


Frank Marcopolos founded 'The Whirligig' literary magazine in 1999, which has been called 'a landmark, demonstrating the power of the literary underground.' One reviewer said that 'you get this true lion-roaring sense that Editor Frank Marcopolos knows what he likes, and how to read, and how to publish, and he has guts, and eats insects on Wheaties with bleach.' Frank's long-form fiction has been reviewed with such praise as 'thorough-goingly entertaining' and 'highly readable...recalls the style of Michael Chabon or John Irving. A literary gem that should not be missed.' A broadcasting-school graduate, Frank's unique literary-audio work has been featured in movie trailers, scholastic environments, underground mixtapes, and on YouTube, with one of his audiobooks achieving over 100,000 'views' there. He lives in Pittsburgh, PA, without a dog, and records at The Bookquarium Recording Studio.


The stories included are as follows:


- My Old Man by Ernest Hemingway
- Anthem by Ayn Rand
- The Most Dangerous Game by Richard Connell
- The Curious Case of Benjamin Button by F. Scott Fitzgerald
- An Occurrence at Owl Creek Bridge by Ambrose Bierce
- The Yellow Wallpaper by Charlotte Perkins Gilman
- To Build a Fire by Jack London
- Bartleby, the Scrivener by Herman Melville
- Landing in Luck by William Faulkner
- The Fly by Katherine Mansfield
- The Kiss by Kate Chopin
- The Minister's Black Veil by Nathaniel Hawthorne
- The Tell-Tale Heart by Edgar Allan Poe
- The Lady, or the Tiger? by Frank R. Stockton
- The Open Boat by Stephen Crane
- Young Goodman Brown by Nathaniel Hawthorne
- The Gift of the Magi by O. Henry
- The Dead by James Joyce
- The Gun by Philip K. Dick
- The Big Trip Up Yonder by Kurt Vonnegut, Jr.
- The Legend of Sleepy Hollow by Washington Irving
- The Purloined Letter by Edgar Allan Poe
- The Door in the Wall by H.G. Wells
- On the Gull's Road by Willa Cather
- The Story of an Hour by Kate Chopin
- The Last Leaf by O. Henry
- 2BR02B by Kurt Vonnegut, Jr.
- The Picture in the House by H.P. Lovecraft
- The Monkey's Paw by W.W. Jacobs
- A Dark Brown Dog by Stephen Crane
- Araby by James Joyce
- The Cask of Amontillado by Edgar Allan Poe
- The Luck of Roaring Camp by Bret Harte
- The Interlopers by Saki (H.H. Munro)
- Up in Michigan by Ernest Hemingway
- William Wilson by Edgar Allan Poe
- The Street by H.P. Lovecraft
- The Damned Thing by Ambrose