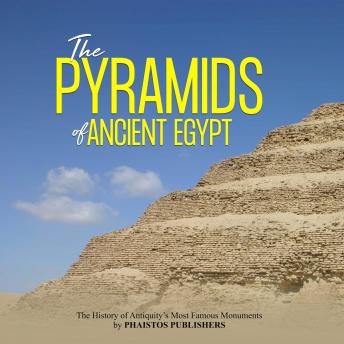 Pyramids of Ancient Egypt, The: The History of Antiquity’s Most Famous Monuments

In addition to being one of the Ancient Wonders of the World, the Great Pyramid of Giza is extraordinary for a number of reasons. It is one of the greatest feats of engineering in the ancient world, to the extent that it remained the tallest built structure in the world from the time it was finished up until the Lincoln Cathedral was completed around 1300 CE. The fact the nearly 520 feet tall spire of the cathedral was erected nearly 3,800 years after the Great Pyramid of Giza was constructed, a testament in its own way to the longevity of the pyramid itself. Even since then, it remains a monument that has stood the test of time, remaining the only one of the original seven wonders still surviving. Archaeologists have estimated that when completed, the Great Pyramid stood 480 feet tall, with each side measuring 756 feet in length, with a total mass estimated at being 5.9 million tons and a volume of approximately 2.5 million cubic meters.

The Great Pyramid is only one of many pyramids at Giza, and people still associate Egypt with pyramids due to these massive monuments, but many are unaware of the long tradition of pyramid building within Egypt. There are many more pyramids in Egypt than just those at Giza - Lepsius’ expedition listed 67 “pyramids” throughout Egypt, all listed in his Denkmäler aus Aegypten und Aethiopien. Some of these monuments have since been relabeled as mastabas or other monuments, but many represented initial attempts at building pyramids by some of Egypt’s earliest kings, offering testament to the fact that the Egyptians spent several centuries trying to master the process of building such majestic monuments.

Pyramids of Ancient Egypt, The: The History of Antiquity’s Most Famous Monuments