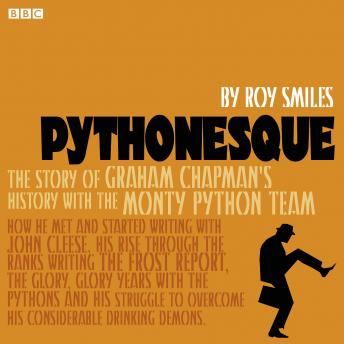 The story of Graham Chapman's history with the Monty Python team; how he met and started writing with John Cleese, his rise through the ranks writing 'The Frost Report', the glory, glory years with the Pythons and his struggle to overcome his considerable drinking demons. And how the collective kindness of Messrs Cleese, Jones, Idle, Palin and Gilliam saved him from oblivion and gave him the lead in the two funniest British films of all time: 'Monty Python And The Holy Grail' and 'Monty Python's Life Of Brian'. Apparently Chapman was recruited into the RAF at birth and flew bombing missions over Germany in a pram; Cleese got into the Footlights by doing a rather peculiar walk; Chapman had to take a test to become an alcoholic; Cleese returned to a pet shop to sing the praises of a recently purchased budgie and Chapman discovered on his last day on earth that Death likes Spam and drives a Ford Anglia. Written by Roy Smiles.