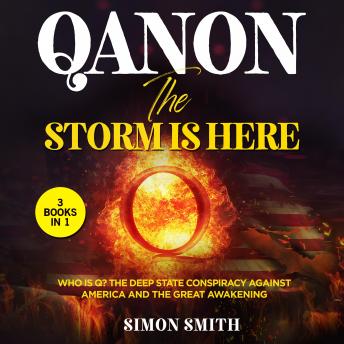 QAnon, The Storm Is Here (3 Books in 1): Who is Q? The Deep State Conspiracy Against America and The Great Awakening

You’ve probably heard about the QAnonConspiracy theory that has taken the world by storm, right? Are you ready to discoverthe hidden secrets of this theory?

If the answer is yes, then read on…

You are about to step into the world of conspiracies and discover one of the most talked-about, THE QANON CONSPIRACY.

QAnon has gained a lot of traction in the US and now Spilling over to the UK. It is a conspiracy theory that claims of theexistence of a cabal that is comprised of Hollywood celebrities, Devil-Worshipping Democrats, and Billionaires who run the world. It also claims that these members engage in human trafficking, pedophilia, child abduction, and harvesting of chemical that has life-extending properties from the blood of children. The followers of this conspiracy believe that Donald Trump, The President of the United States, is waging a war against this cabal and all its collaborators to bring down all malefactors and lock them all in Guantanamo Bay.

Here is a sneak peek of what you are going to learn:

This conspiracy theory involves a lot of parts that you need to learn about and a lot of surprising claims. If you want to get all the surprising right information in a well-researched manner, then this is the book you should go for.

QAnon, The Storm Is Here (3 Books in 1): Who is Q? The Deep State Conspiracy Against America and The Great Awakening