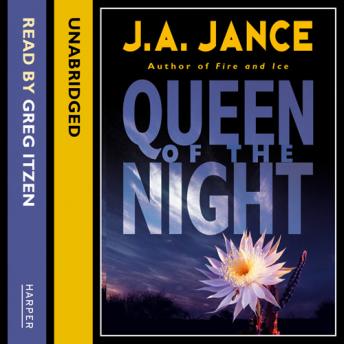 Every summer, in an event that is commemorated throughout the Tohono O'odham Nation, the Queen of the Night flower blooms in the Arizona desert. But one couple's intended celebration is shattered by gunfire, the sole witness to the bloodshed a little girl who has lost the only family she's ever known.

To her rescue come Dr. Lani Walker, who sees the trauma of her own childhood reflected in her young patient, and Dan Pardee, an Iraq war veteran and member of an unorthodox border patrol unit called the Shadow Wolves. Joined by Pima County homicide investigator Brian Fellows, they must keep the child safe while tracking down a ruthless killer.
In a second case, retired homicide detective Brandon Walker is investigating the long unsolved murder of an Arizona State University coed. Now, after nearly half a century of silence, the one person who can shed light on that terrible incident is willing to talk. Meanwhile, Walker's wife, Diana Ladd, is reliving memories of a man whose death continues to haunt her.

As these crimes threaten to tear apart three separate families, the stories and traditions of the Tohono O'odham people remain just beneath the surface of the desert, providing illumination to events of both self-sacrifice and unspeakable evil.