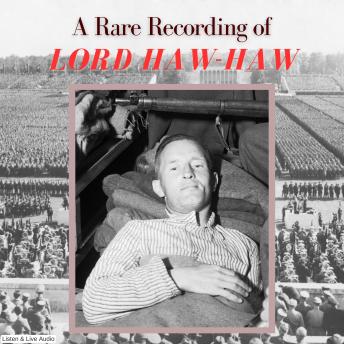 A Rare Recording of Lord Haw-Haw

Lord Haw-Haw was a nickname given to the American-born Brit, William Joyce, who broadcast Nazi propaganda to Britain from Germany during the Second World War. Lord Haw-Haw was a Nazi broadcaster during World War II. Joyce emigrated to Germany and broadcast Nazi messages for several years. The Reich Ministry of Propaganda used these broadcasts to discourage and demoralize Allied forces and the British population by exaggerating their war losses. Up to 60% of the British population actually tuned in to Lord Haw-Haw's broadcasts. They lasted from 1939-1945. Eventually Joyce was captured by Allied forces and brought back to England for trial. He was convicted of treason and hanged on January 3, 1946. This recording from April 9, 1940 is about the Nazi invasion of Denmark and Norway.

This title is due for release on October 9, 2019
We'll send you an email as soon as it is available!